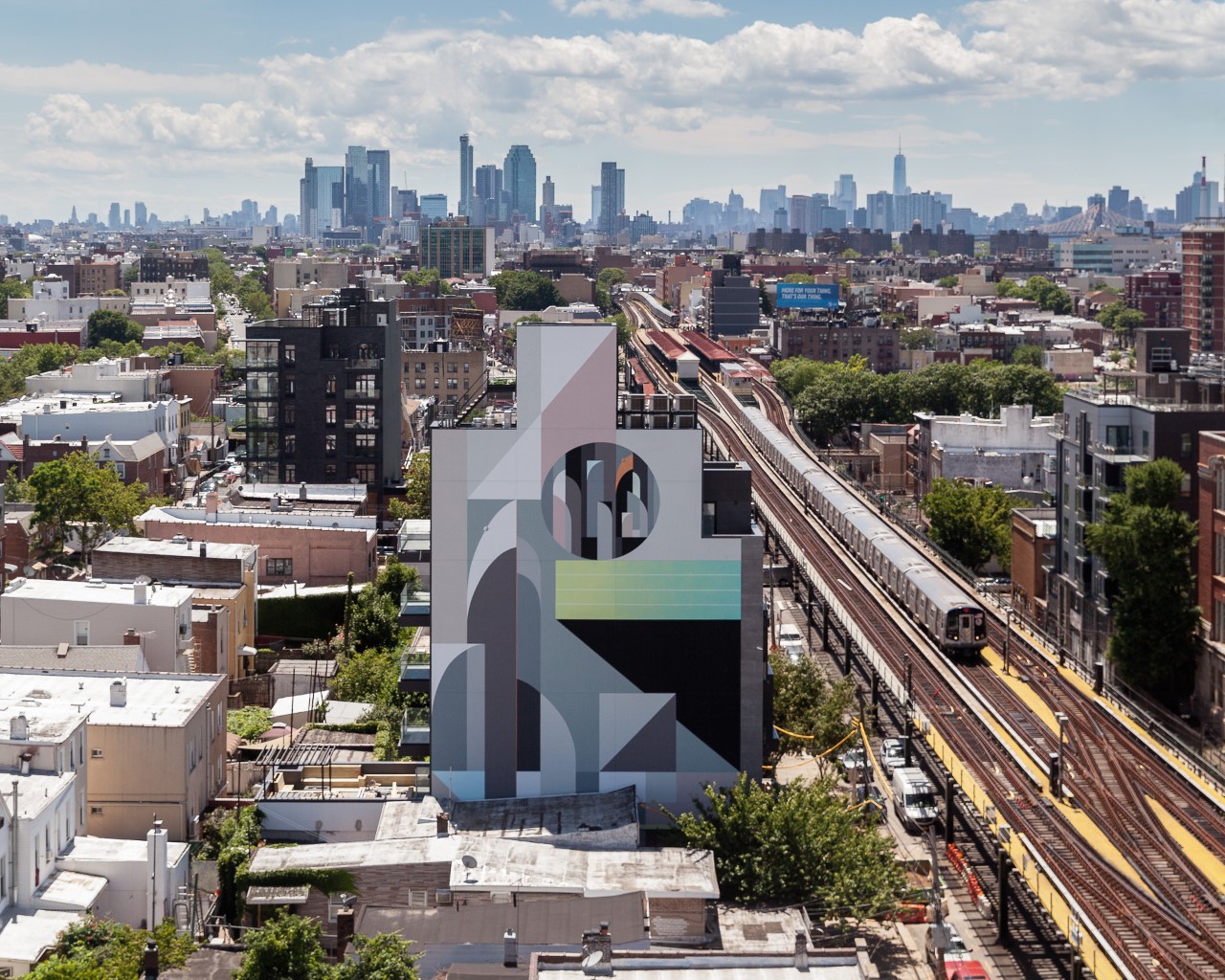 I caught up with Tony “Rubin” Sjöman, American Scandinavian Society’s Sweden/ New York based cultural grant award recipient of 2019. This summer he opened his studio to our community for a glimpse at his creative process, demonstration of work in progress and a walking tour of his murals around New York City. As co-chair serving the American Scandinavian Society’s arts program, I was excited to interview Sjöman after the tour. The Cultural Grant Art Exhibition opens February 5th through March 14th. Join us for the reception. 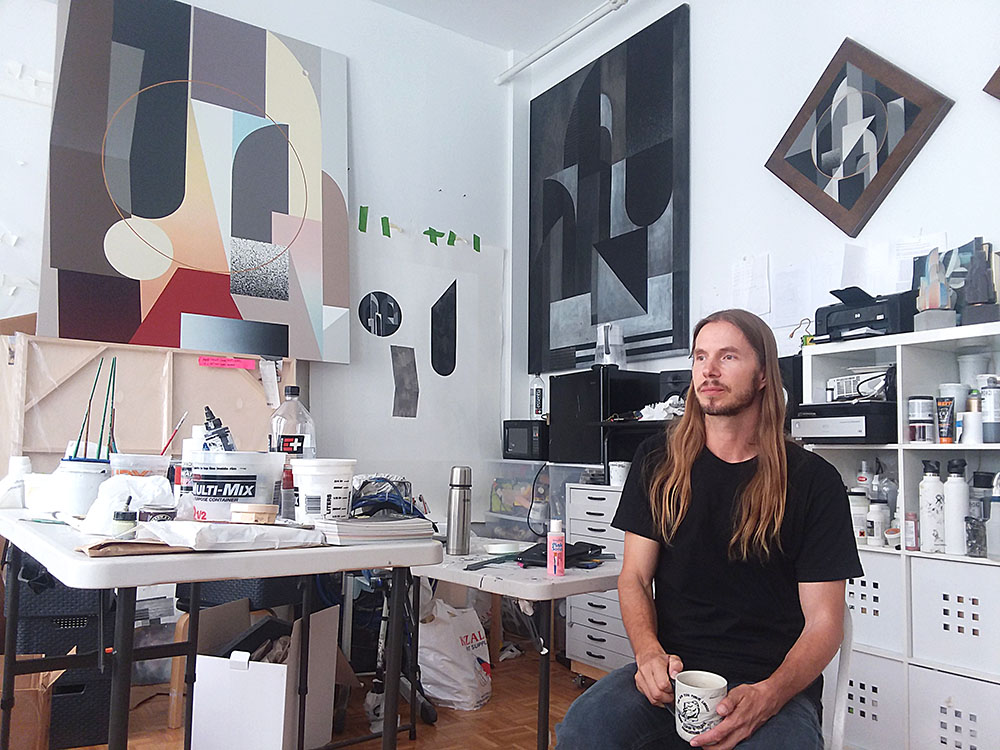 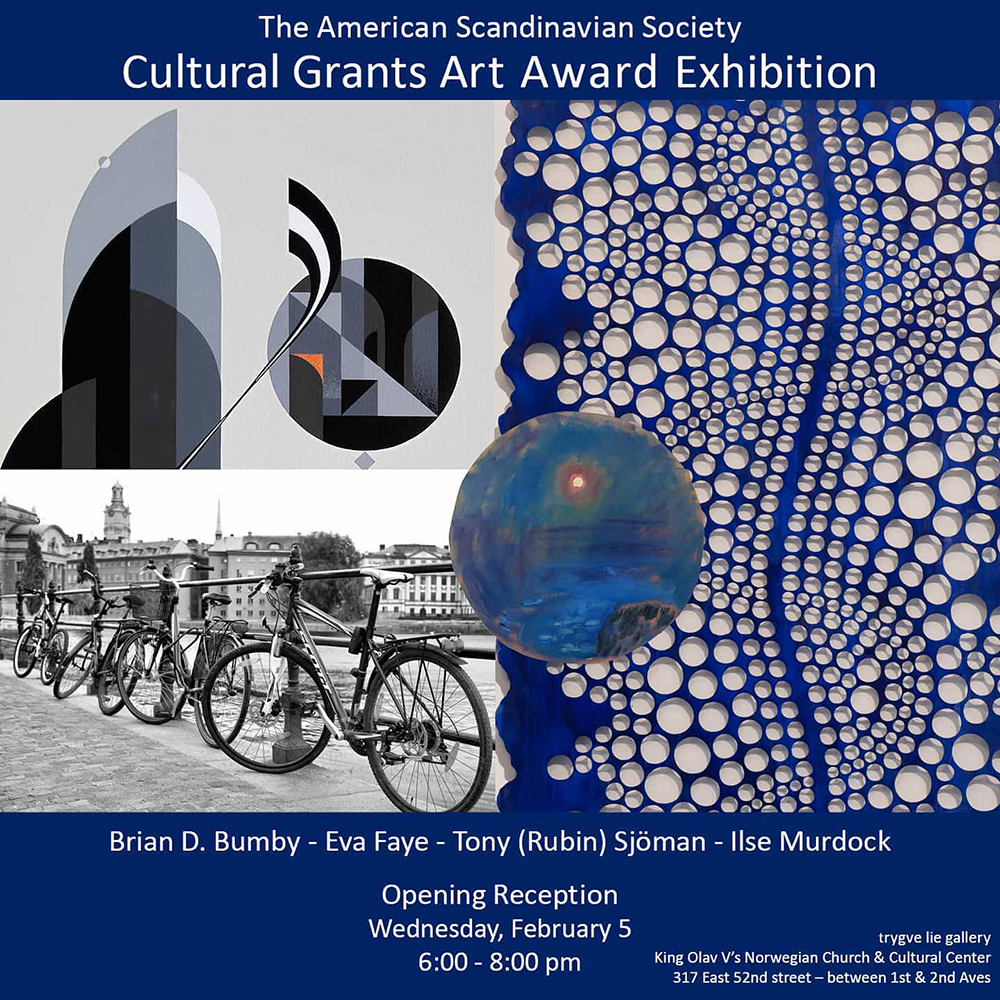 Why is Public Art Important?

Public art is known to have a positive impact on communities by supporting economic growth, sustainability, cultural identity, social cohesion, public health and a sense of belonging. It is especially important to New York City, in fact, Darren Walker, president of the Ford Foundation and board member serving the Foundation for the Arts and Preservation in Embassies has said,

“Public art is a public good…It is impossible to have a society that is civil and educated without public art.. It lifts up humanity and challenges the individual who encounters it to think differently about the world.” 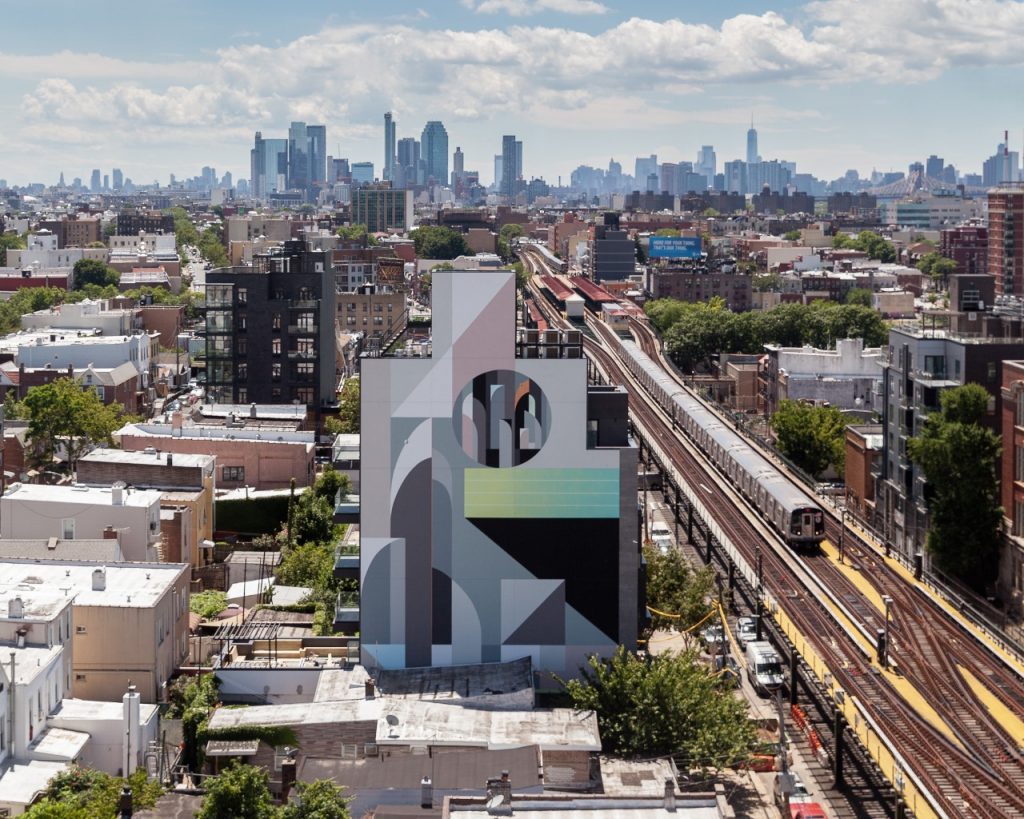 What I most enjoy about Tony “Rubin” Sjöman’s work is it’s calm and contemplative nature with an indisputable presence. Much like the artist himself, the work has a quality of tranquil Stoicism. The compositions are asymmetrical, offering a sense of balance and completeness that is objectively optimistic. The block like motifs and his choice of color and texture, paint a picture of what a city might look like, if it was comfortable with itself. A city veiled in serenity at sunset with a circular vignette offering a more intimate view from afar. To me, the work shares with us some signals of why we look, so often, to Scandinavia for simple, clear design solutions that make life more calm and serene. 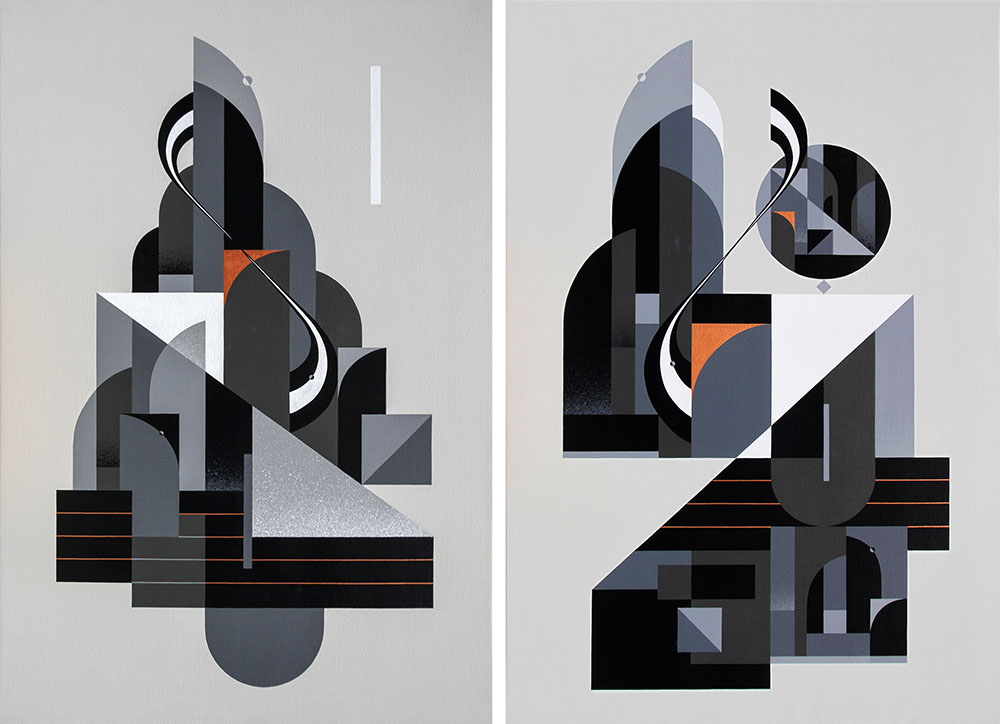 Sjöman’s work touches so many industries, his relevance is undeniable. From high-rises to hotels, fashion to food and beverage and even credit cards his work can be seen the world over in urban street settings as well. He’s exhibited at Scope Miami, Art Miami during Art Basel and has also been featured in NBC News, New York Post, NY1 News, Vice Magazine, and Time Out New York. Spanning public community spaces as well as intimate interiors, his work has been featured in catalogs for design brands such as Design Within Reach and paired with auctions at Sotheby’s. Additionally he’s partnered with brands such as American Express, Marriott Hotels, Heineken, Shake Shack, Rag and Bone as well as GAP. He’s also the subject of a much talked about coffee table art book, “Rubin: New York / Scandinavia” (Dokuments Press, 2016) 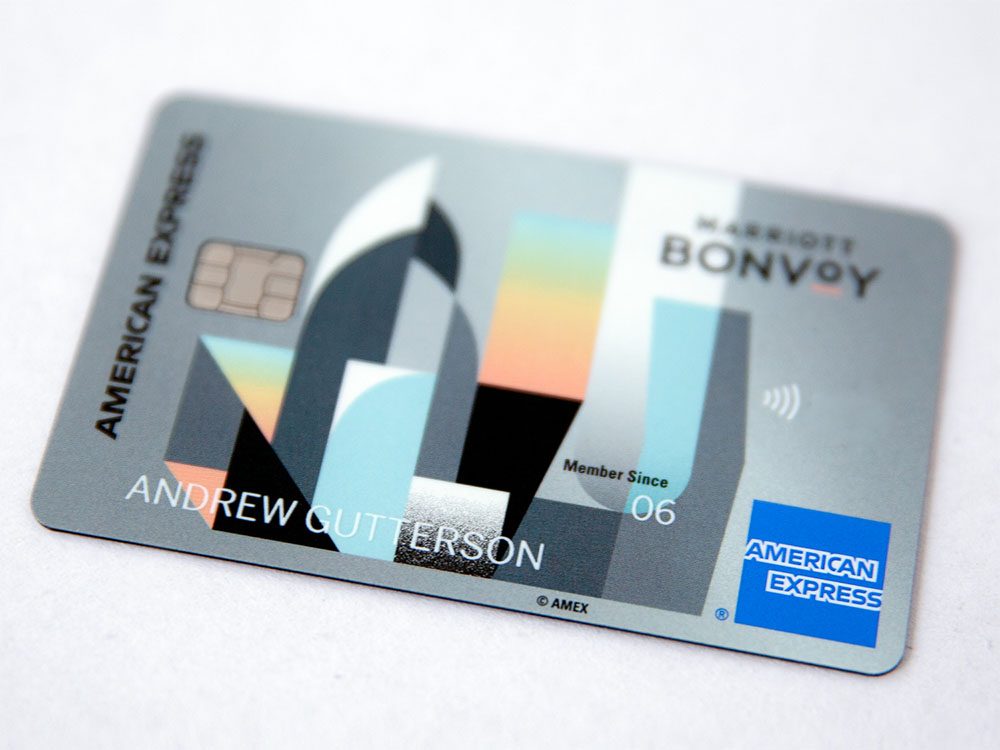 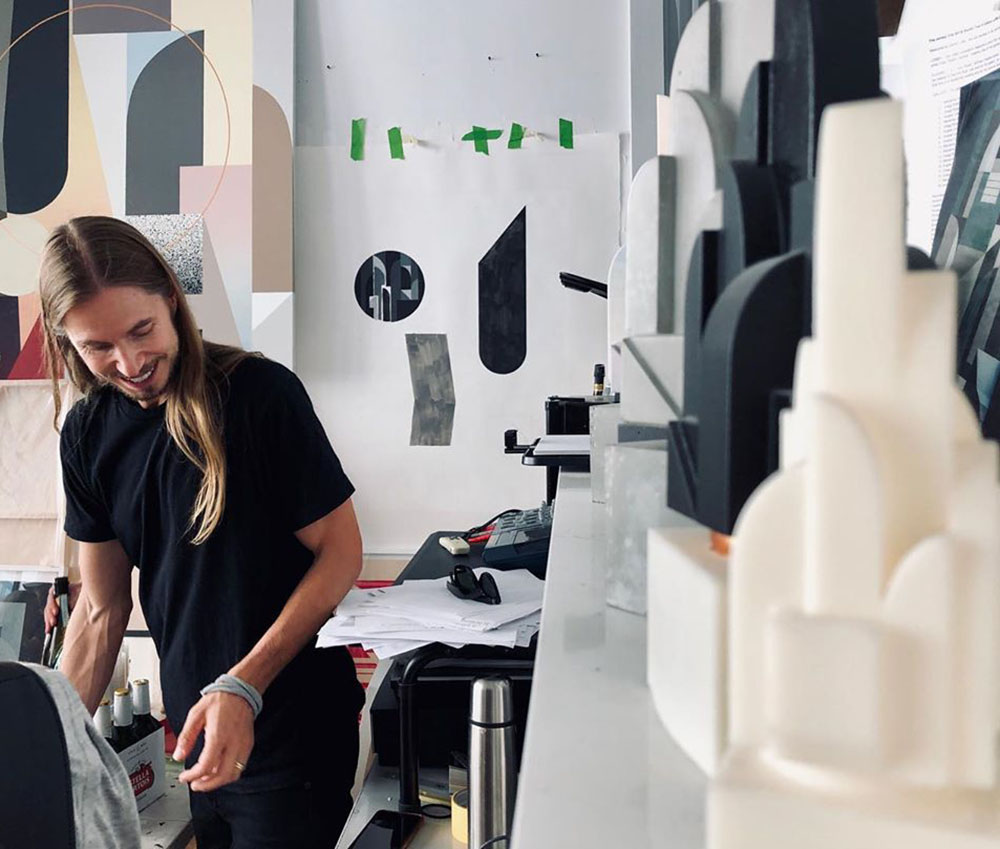 In the below interview Sjöman shares what inspires him from music, art and architecture as well as his thoughts on the role art plays and how public space design needs to change in order to support quality of life in our community and culture. 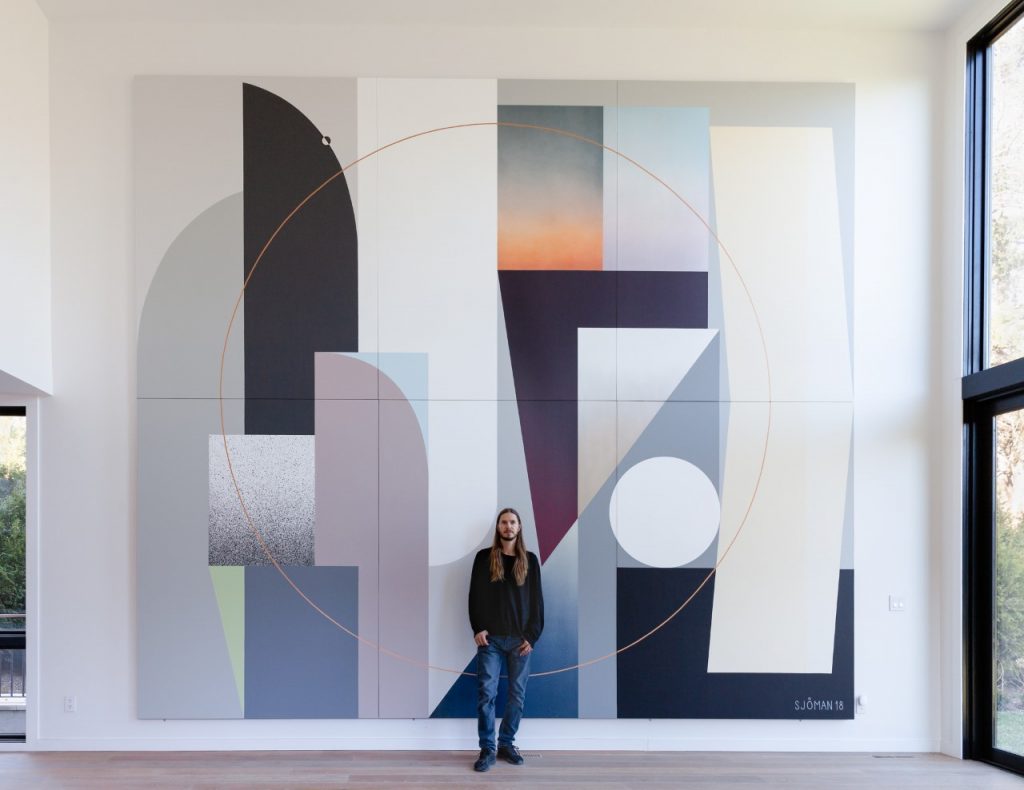 Garrott Designs: Past interviews have mentioned that you take strong influence from graffiti art, especially inspired by NYC in the 70’s. Artists such as Basquiat, Keith Haring, FUTURA 2000 are named among your influences. However, your color palette and compositions have a soothing and calm quality attributed to Scandinavian design. Can you tell us a little bit about your Finnish and Swedish background and how it’s informed your unique approach to mural art?

Tony “Rubin” Sjöman: I started doing Graffiti at a very young age (9 years old), so what I do originates from the letters I used to do as a kid. Pioneers like Futura and Keith Haring was a big inspiration because they were able to break outside the norm. They weren’t afraid to break out of the letters and create something new within Graffiti and Street Art that hadn’t been done before, so I guess it’s more of the mindset of those artists that inspired me. 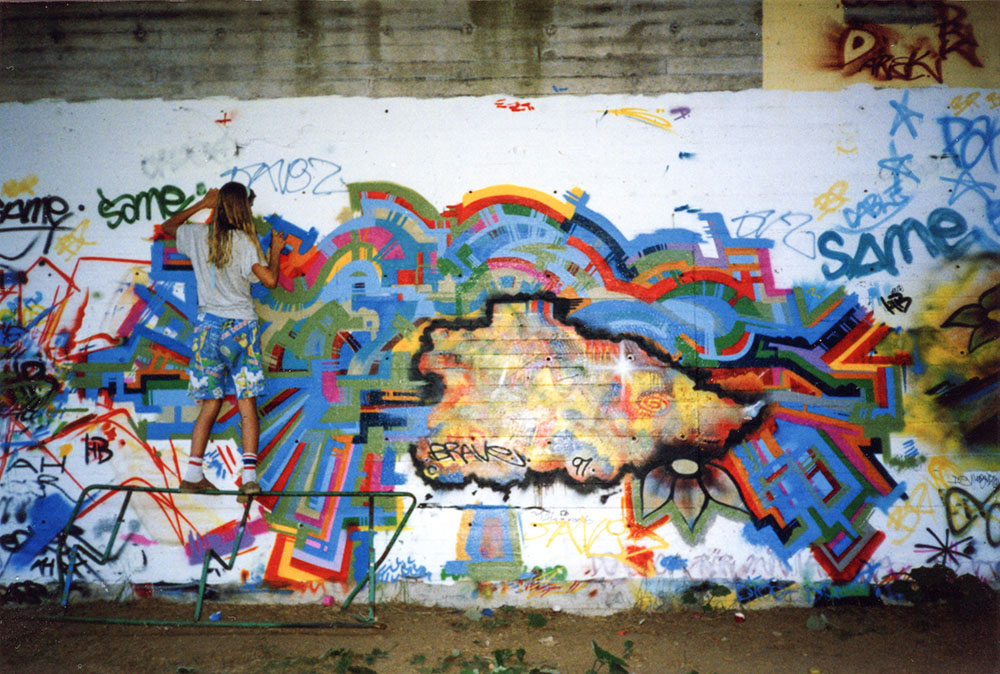 After moving to New York I started to deconstruct my Graffiti and to remove everything both in terms of color and form that didn’t feel like me to instead find my own visual identity. I didn’t necessarily always like the direction but the most important thing was (and still is) to stay honest in what I do. Things tend to go in their own direction a lot of times and I just tried to hang on as well as I can. I think everything affects you, both visually but also experiences. Both consciously and unconsciously and when I realized that I can use my art to both process things that had happened in my life that I never dealt with at a young age and also to express myself in the most direct way, the flood gates opened. The clean Scandinavian aesthetics are in my DNA and I’m not trying to hide that anymore like I sometimes did with graffiti.

I also grew up in a typical Finnish home surrounded by Iittala glass and Marimekko with it’s polka dots and flower designs. I’ve also always loved the architecture of Alvar Aalto, even before I knew it was done by him.

GD: You recently won a grant award from the American Scandinavian Society for your work and achievements as an international artist. How has this grant helped you move forward in your work? How has it helped you grow?

Sjöman: Being awarded a grant from the American Scandinavian Society has finally given me an opportunity to connect with the Scandinavian Community here in New York. It’s also given me the chance to highlight my Scandinavian background and help to highlight Scandinavia through what I do here in the states and that’s something I hope to continue to do in the future.

GD: What are 3 core values of your Finnish background that makes you such a dynamic artist? How do those values translate into your work?

Sjöman: There’s something in Finland called “Sisu”. It’s a Finnish term almost impossible to translate or describe. A sort of inner strength or perseverance in a very difficult task. I paint very big and my murals are always hand-painted by me and sisu is what brings me through some of these what might seem to be very difficult or nearly impossible tasks on paper. Low-key is also very typical Finnish that also is pretty characteristic for my work. Hard working is also very very Finnish even though it’s closely connected with Sisu.

GD: You often work with real estate developers in the commercial sector. Can you share with us a little bit about what that process is like? Is it more collaborative? How do you begin to conceptualize a visual representation for the company, brand, or organization?

Sjöman: Sure, the process is usually pretty much the same. Everything I do always starts with pencil sketch studies where I initially entirely focus on the design or as I often prefer to call them compositions. Having the strongest and best possible composition before moving on to colors is very important to me. The composition needs to stand on its own without any of the bells and whistles and not the other way around. 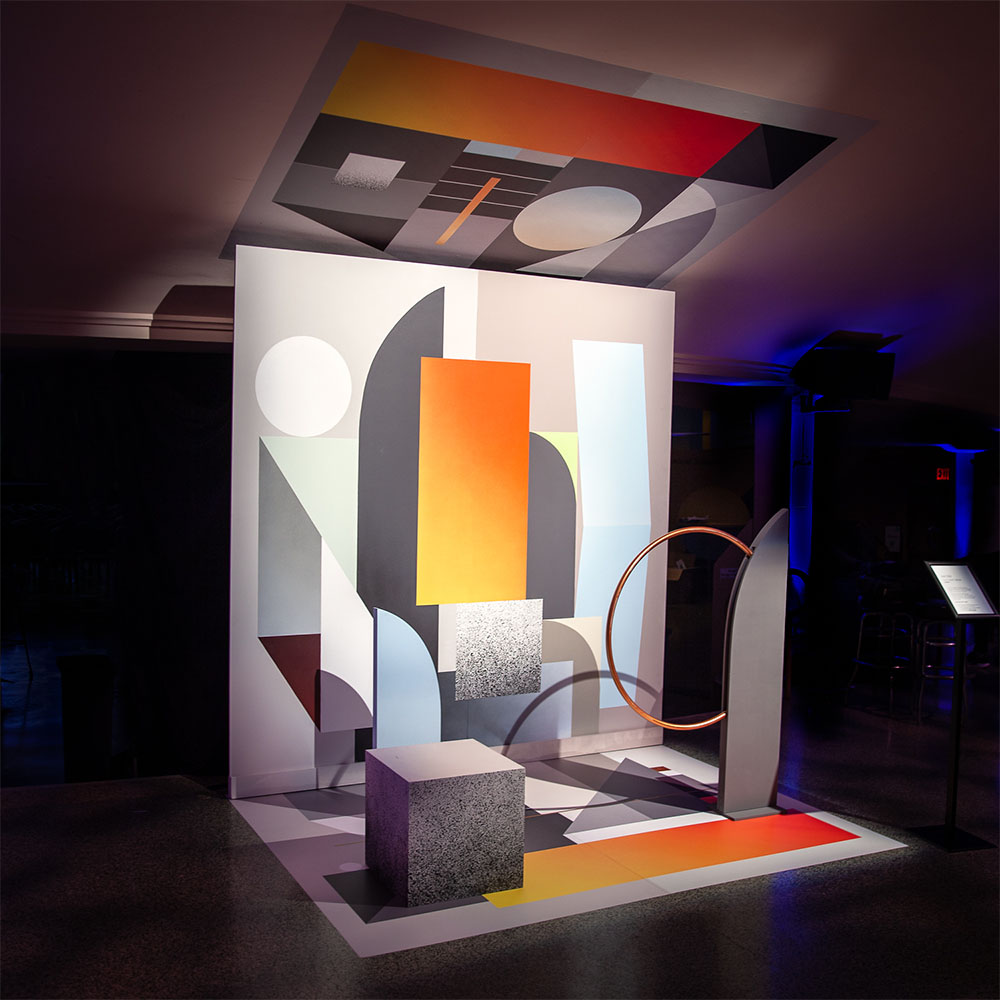 GD: What part of public space design do you feel needs to change and how would that change benefit the communities it serves?

Sjöman: I think all parts of public  spaces needs to change. A majority of the information and visual input where being fed with today is aimed towards consumption. People are given  few opportunities to visual stimulation without any economic interests behind. There’s a lack of pure and honest artistic expression that we all would benefit from greatly today where everything has to be so instant and where our phones and touchscreens gets our most attention. 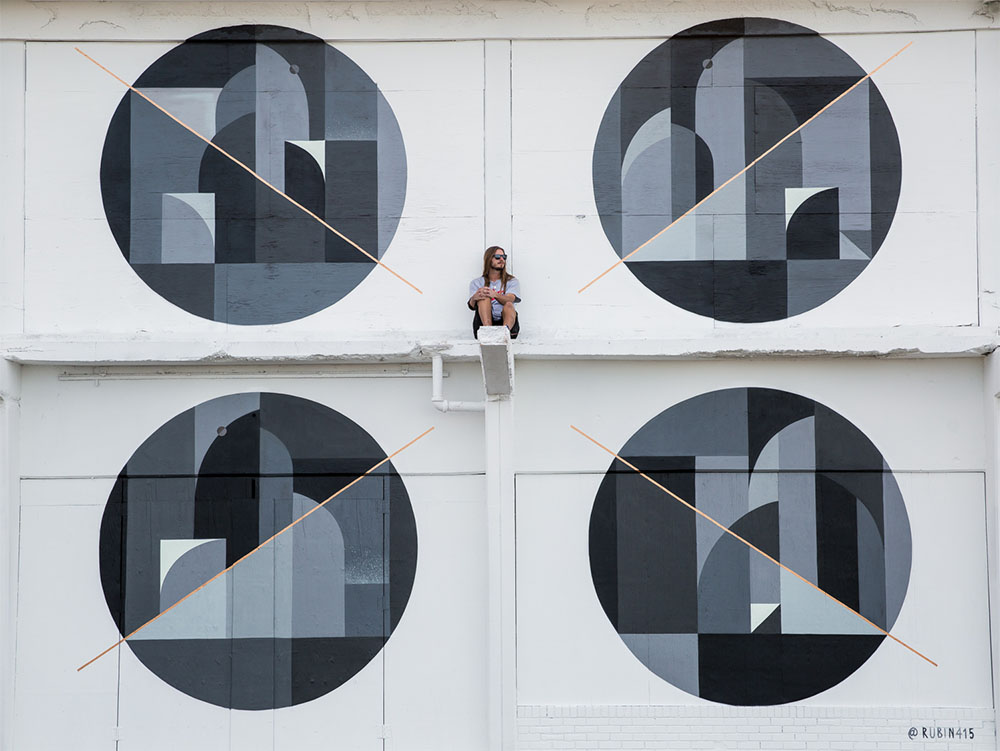 GD: What do you hope people will experience or value about your work?

Sjöman: I hope everybody experience different things. There’s a story and meaning behind each form and color but I often prefer to keep that personal and instead ask a person what he or she sees in my work and it’s always amusing to hear the answers. What I hope they value is an honest form of expression, then if that’s good or bad is less important. To make them feel something is the correct way to put it, I think. 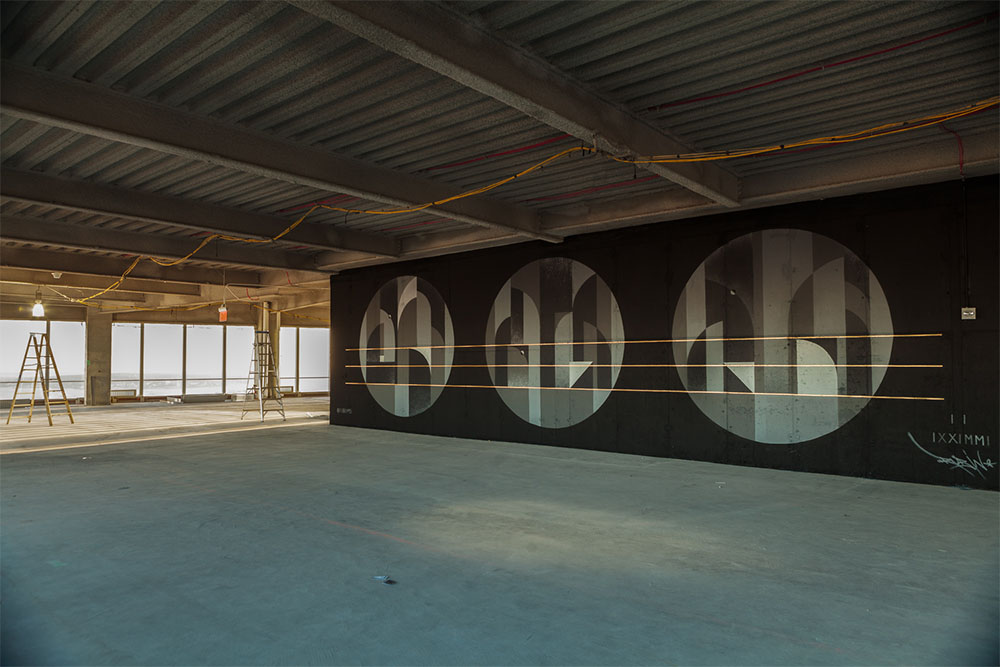 GD: During the walking tour and studio visit you mentioned how much music inspires you while you work. Who are some of your favorite musical artists? Do you have certain artists you listen to for certain creative process? If so, what is an example of music that helps you get in the flow state?

Sjöman: I have a background as a musician. I grew up playing classical guitar and later on in bands. I still think black and dark colors feels more minor while vibrant colors feels more major. I love The Doors, The Rolling Stones and Pink Floyd but I can’t listen to them when I paint. I prefer to listen to very obscure minimalist electronic music mostly from the late 70’s and early 80’s. Deux, Lebanon Hanover and Facit are a few names that I like to listen to in the studio. I never listen to music or wear headphones when I paint murals though, I like to be present, it’s a very underrated site specific aspect of mural painting which is important for me.

GD: How is the mural and public art scene different in Scandinavia than New York?

GD: During the walking tour, you talked about how the circle plays a key role in your compositions. Can you share the symbolism or ideas behind this key component to your work?

Sjöman: A lot of what I do comes unconsciously and I then figure out things and often meanings afterwards. I grew up in a boring housing project in Sweden surrounded by grey concrete and forest. The eight story house I grew up in had balconies covered in a pattern consisting of hundreds of small circles. I never liked it as a kid but I realized later in life how it had affected me and what I do. Nowadays the circle is mostly reduced to a thick outline in my copper accent color which is a nod to my father who passed away when I was 12.

GD: What other designers or artists or even architects inspire you? Name a key piece that speaks to you as an example and why.

Sjöman: At the moment with the risk of sounding boring, Picasso. I spent some time reading about Picasso last fall and a whole new world opened up when I finally was able to connect the dots and learn more about him. Also MoMA re-opened last fall and I went there to see Les Demoiselles d’Avignon (The women of Avignon). I’ve seen the piece there several times before but to finally be able to understand its meaning and historic significance was a spiritual experience. 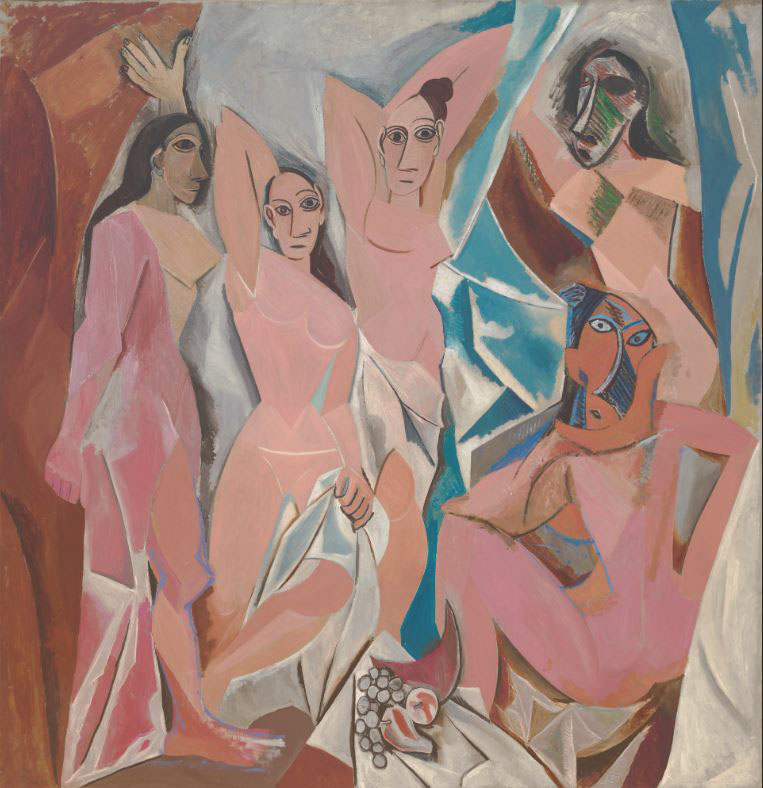 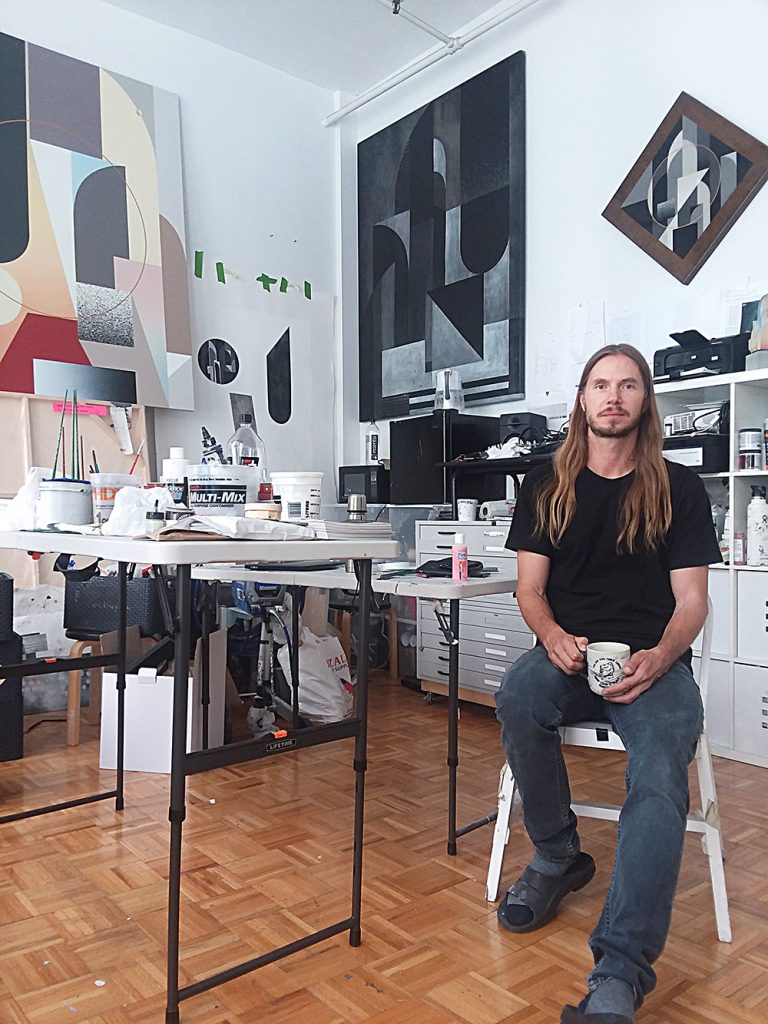 How Sports Brands Can Up Their Game
Scroll to top