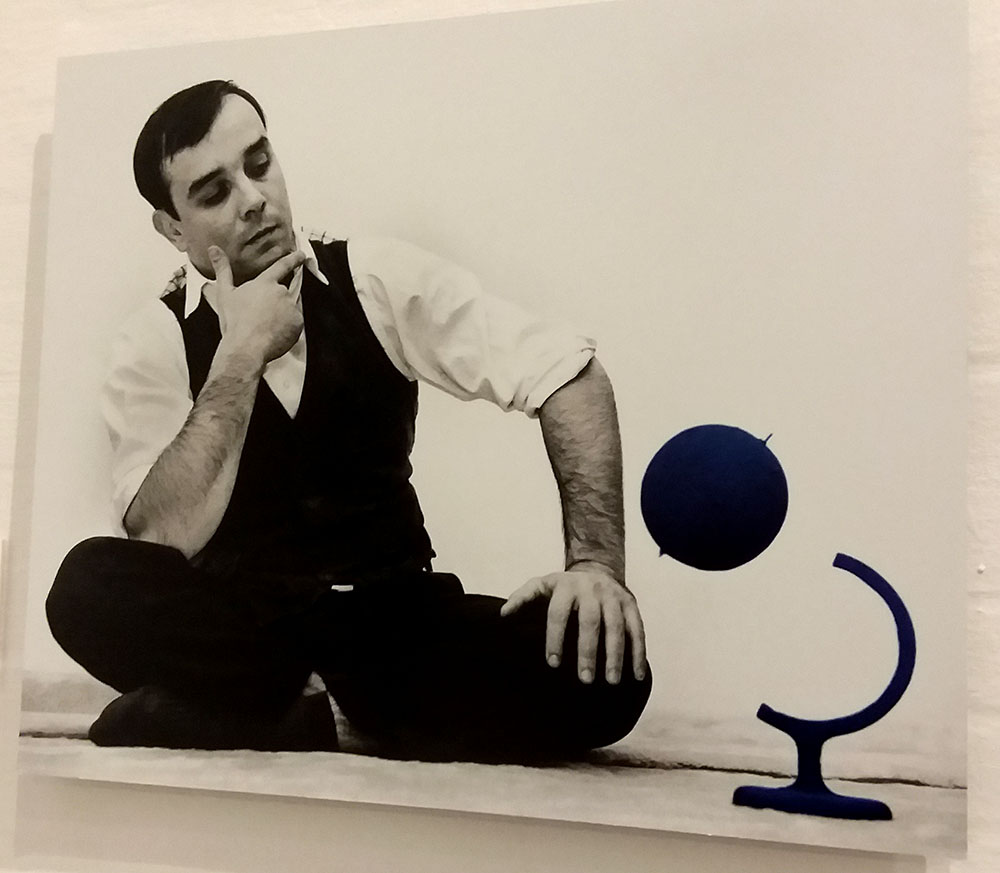 Thanks to the IFDA EF Valerie Moran Grant, I traveled to Copenhagen, Denmark to study Scenarios Planning with the Copenhagen Institute for Future Studies and research Danish culture as it impacts Interior Design and City Planning. While I have much to share with you, let’s start with Space Travel! The Louisiana Modern Art Museum’s fall exhibit, “The Moon- Inner Worlds to Outer Space” was an exciting connection to many of the ideas I came to explore. Since there is plenty of information available online, about the contents of the exhibit, I’d like to share my favorite excerpts from the exhibition and what about them tickles my brain.

The connection of art and science inspires the work I do as an artist, designer and trend analyst. Designing for tomorrow will depend on these two disciplines co-creating the future. Art and science make beautiful music together. For example, the exhibit opened with something so moving I almost cried. A piano at the end of the hall playing one of my favorites,  Beethoven’s “Moonlight Sonata.”  The sonata has been translated into Morse code by artist, Katie Paterson and sent to the Moon by EME transmission (Earth-Moon-Earth).  Some signals were absorbed by shadows or lost in deep craters of the moon. Not all information was reflected back to the Earth. The piano played the Moon’s ‘interpenetration’ of the piece where the missing information became intervals and rests. The video is on my Instagram if you’d like to hear it. The idea that continuous echos of music can bounce between the earth and moon is as inspiring as Starman orbiting for eternity in a Roadster. The Starman Roadster booster landing, full disclosure, did make me cry. 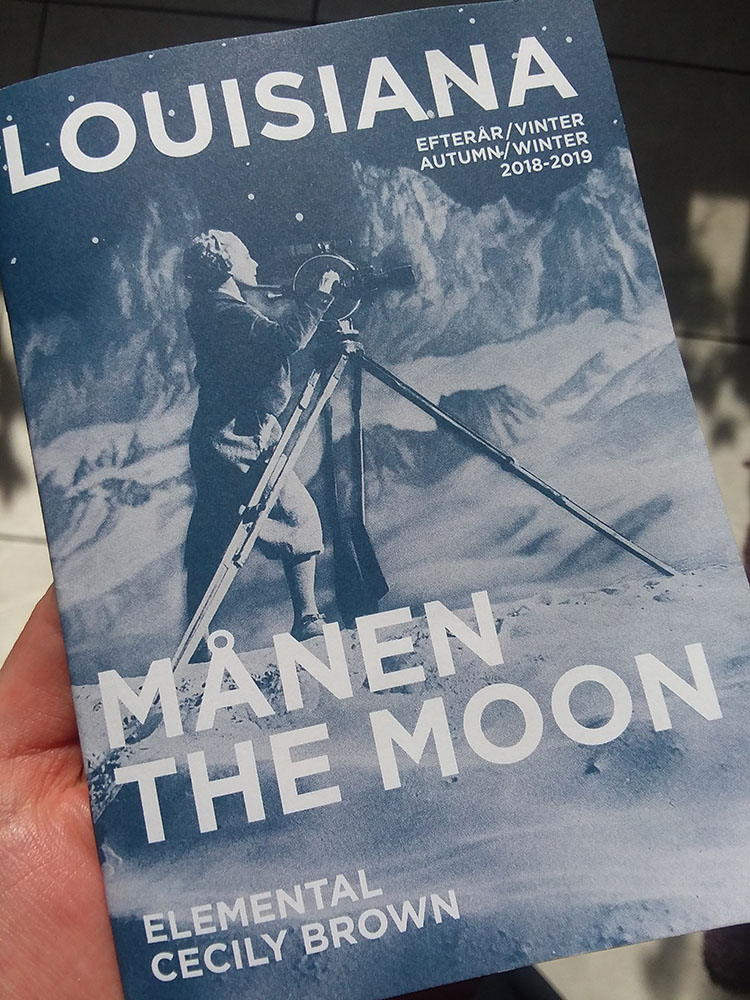 The exhibit explored the Moon as a symbol of romantic longing and imagination, scientific investigation as well as existential and political issues about our place in the universe. One example of how art can influence discovery and innovation was the series of paintings by Donato Creti. The paintings were commissioned by the Count of Bologna Luigi Fernando in 1711 as a gift to Pope Clement XI. The aim was to convince the Pope of the importance of establishing an observatory. The artwork is a political argument from a time when scientific theory often conflicted with the world-view held by the Church. The paintings so moved the Pope that a public observatory opened in Bologna shortly after. “Show Me, Don’t Tell Me” is often a phrase I hear when pitching new concepts. These beautifully executed paintings stirred a man’s imagination over his belief. Art has power to effect change.

The paintings also serve as historical documents of what we did not yet know. Neptune, Pluto and Uranus are not in the paintings. Uranus wasn’t discovered until 1718. 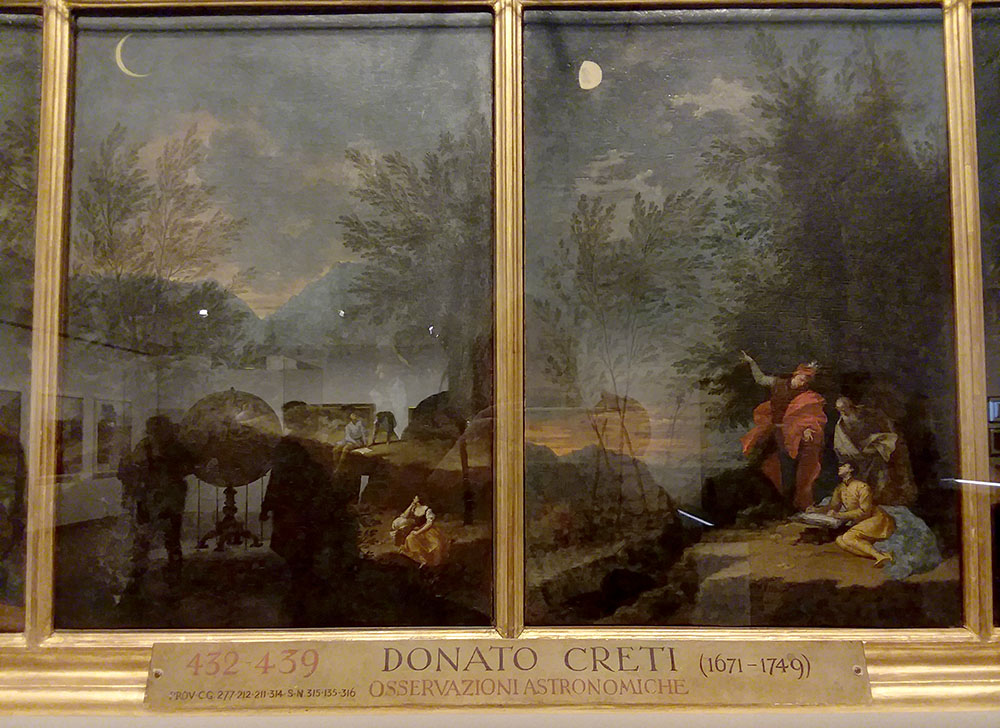 Selenography is a discipline that combines scientific observation with artistic visualization. New discoveries require a new visual language. The oldest preserved Moon Globe, known as a Selenographia was created by portrait painter and amateur astronomer, John Russell. He spent 30 years perfecting an accurate map of the moon as well as many detailed drawings. Only one side of the globe is illustrated because the dark side of the moon isn’t visible from earth and was still unknown. It is inspiring to see how an accomplished artist and amateur scientist can contribute to understanding. 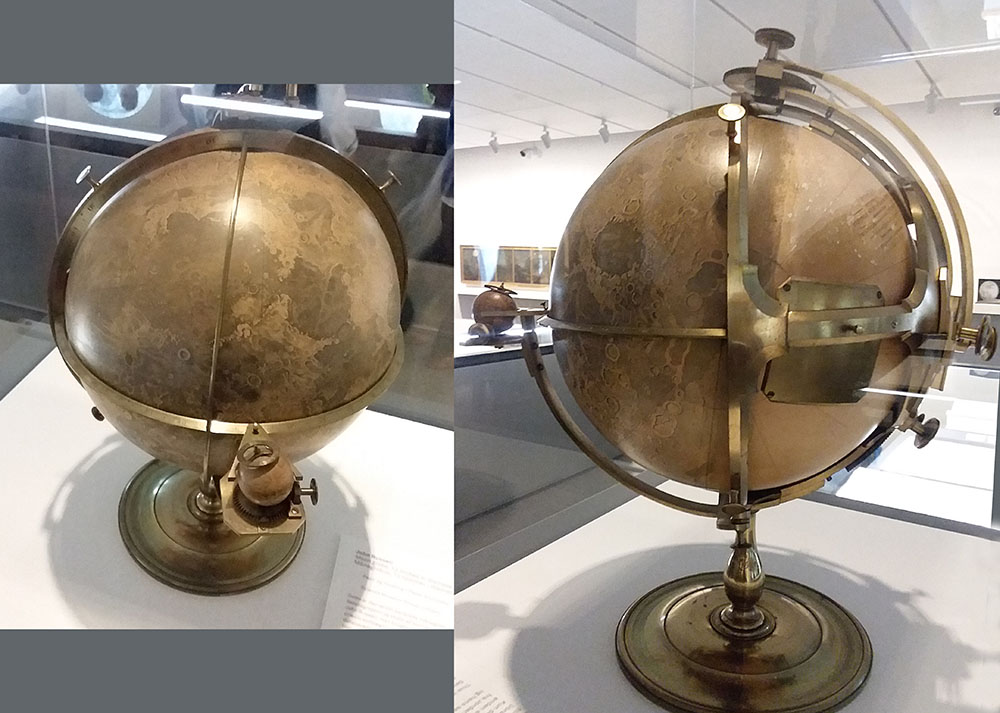 Galileo himself, aspired to be a painter. In 1609 he observed the moon through a telescope from the campanile of the Church of San Gerogio Maggiore in Venice. These are his original watercolor sketches, which show his observations of shadows  on the moon formed by craters and uneven terrain. Galileo concluded that the moon was not a perfectly round celestial sphere but a concrete geographical place that can be observed and mapped, like the earth. Galileo also observed 4 moons orbiting Jupiter which lead him to assert the theory that the Sun, not the Earth was the center of the universe. Contradicting the church’s world-view, he was subjected to repeated inquisition and spent much of his later years in house arrest. Perhaps he would have been more persuasive if he had mastered painting. It is amazing that these are so well preserved. 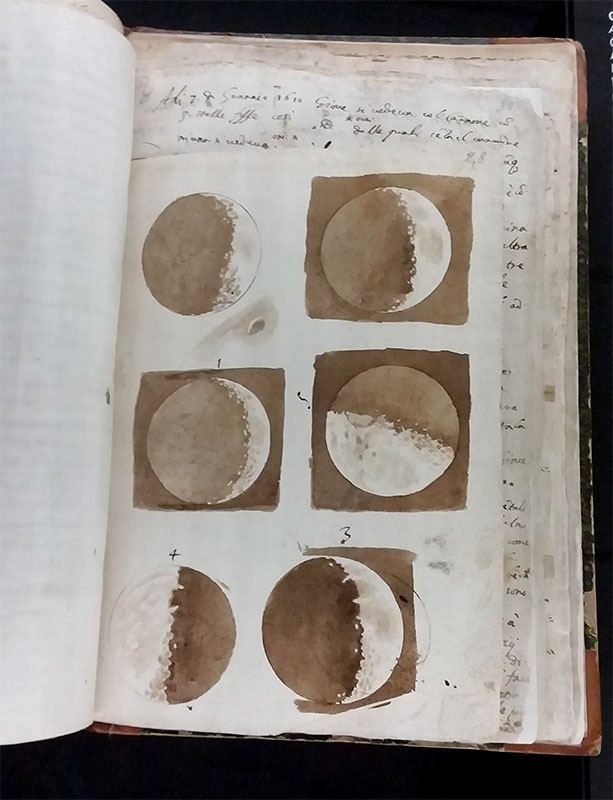 As the moon transformed from a phenomenon to an actual place, in 1957 the Space Race had begun. On both sides of the Iron Curtain, space agencies collaborated with artists to give form and expression to the spirit of the age. Artists became occupied with both the optimism about the future and ideological criticism as aesthetics influenced  popular culture from art, cartoons, film and design. Yves Klein was against a superpower space program and advocated that space travel should be a spiritual journey. Klein developed a concept called the Void, a zen-like state that is void of worldly influences; a neutral zone to pay attention to one’s own sensibilities, and to “reality” as opposed to “representation.”

It is interesting to me, the existential quandaries the space race provoked that touched both art and science. Ed White went on the first American Space Walk on the Gemini 4 expedition in June, 1965. I can imagine, floating in space, tethered to the spacecraft must have been a moment void of worldly influences and an acute awareness of that reality. White described the experience as “The most natural feeling.” This intrigues me to think perhaps on some quantum level, we’re familiar with space and maybe we’ve been there before.

Upon further existential reflection, the idea of leaving an indelible mark in space that may out last human existence blows my mind. Buzz Aldrin snapped a photo of his boot print when he became “intrigued by the peculiar properties of the lunar dust.” The iconic photo is a cultural symbol and reflects the curiosity of his experience in the “void.” Its interesting to think that the boot print could stay for a million years or more because the moon has no atmosphere or wind to whirl it up and blow it away. 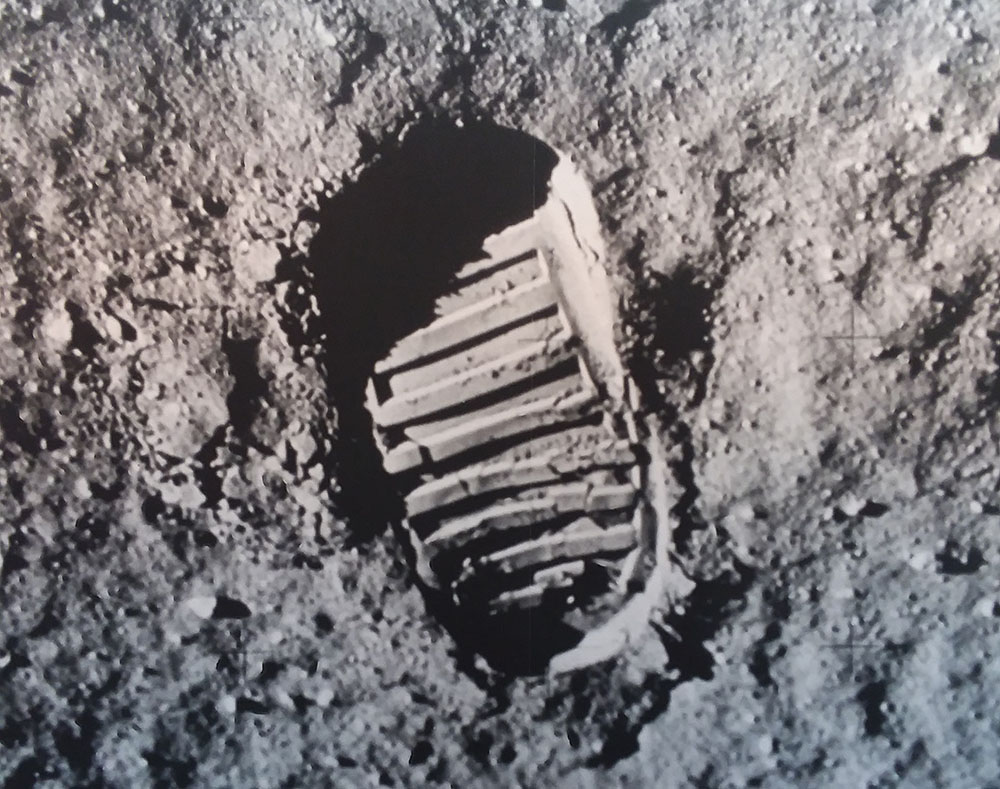 Another existential curiosity folded into the exhibit that I would like to expand upon is the computer code and circuitry that brought us to space. “Moon Memory” is an artist’s depiction of the memory boards containing NASA’s moon landing software. Margaret Hamilton led the programming, transferring the memory boards by weaving copper wires around or through magnetic cores, which visually represent binary code of zeros and ones.

The idea of merging man and machine grows as a real possibility today. Ray Kurzwiel predicts continued acceleration of technological growth to the point where intelligence, humans and machines will combine to encompass the earth, then the galaxy and eventually the entire universe. Kurzwiel said, “The ongoing expansion of our future super intelligence will require moving out into the rest of the universe, where we may engineer new worlds.”  Code could be the key to migrating out of our physical bodies to fully develop outer space with machines, and make it habitable for humans.

“Make no little plans. They have no magic to stir men’s blood and probably will not themselves, be realized.” – Architect and City Planner, Daniel Burnham

“I think when I find the code that generates the world, it will be about 6 lines.”- Stephen Wolfram 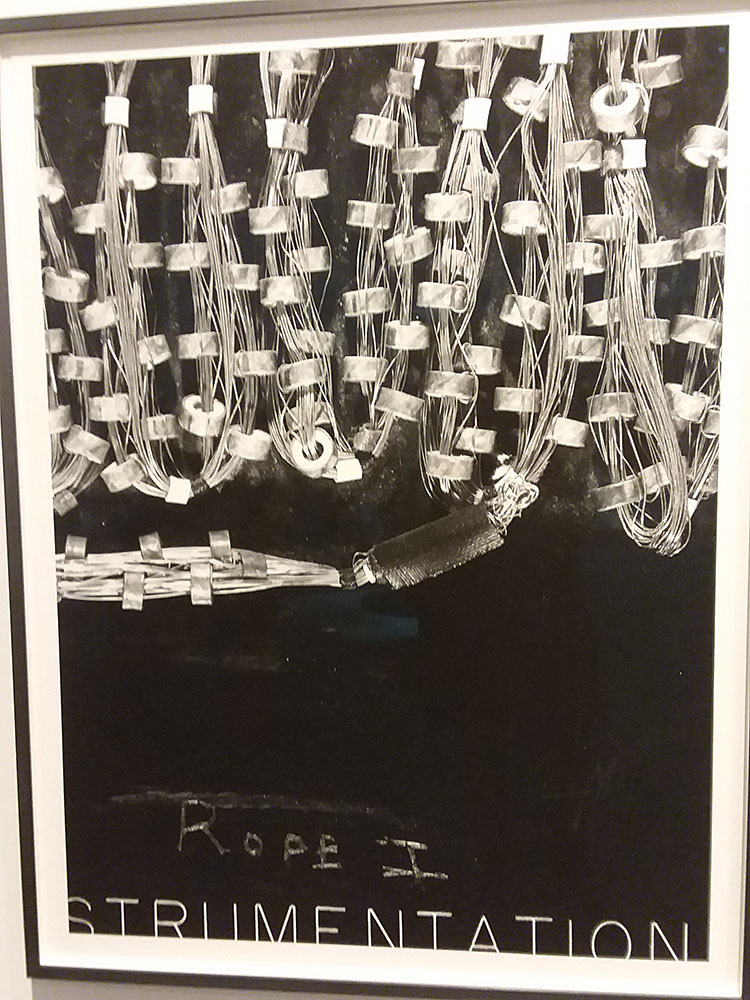 Today, private enterprising leaders such as Elon Musk and Jef Bazos have rekindled our longing to go to space with the promise that colonizing Mars is not only possible but could happen in our lifetime. A UN treaty formed in 1967 states that outer space, including the moon is “common property of mankind.” It raises an interesting question of rights to mining or colonizing, making bodies in space new political territory and commercialized resource bank. Militaristic and commercial agendas are exposed as the moon and space may not be possible to maintain as neutral, free space. The exhibit points out that military surveillance satellites, space garbage, and mineral wealth are growing issues that will demand reconsideration of ownership. As exciting as it is to think about settling new frontiers, the reality has historically been messy. 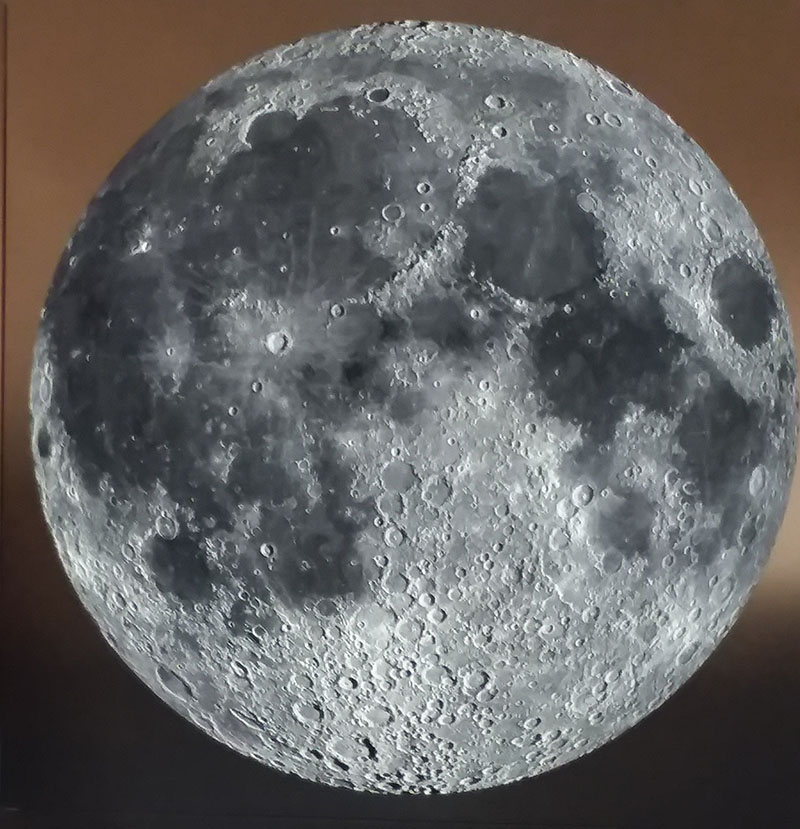 Researchers have concluded that we have entered a new geological age in which mankind is affecting the earth at a planetary level, along the lines of erosion and plate tectonics, etc. Deep Time is the term for intervals of billions of years with which we calculate the geological process and life cycles of planets. Mankind’s actions can be read off in deep time and this new age is called Anthropocene. Architects and designers are developing designs that reinterpret our way of life for worlds beyond earth. The efforts of art to bring us into contact with the great cosmos takes new relevance. Art provides an opportunity to bring the inconceivable scale of the universe within reach. 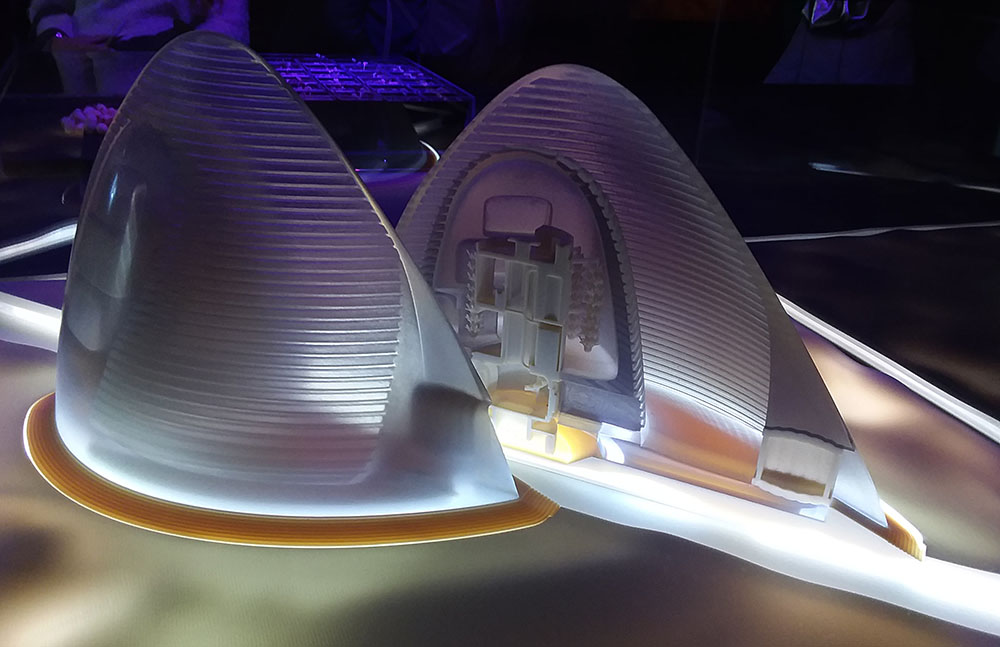 The last human being to set foot on the moon was American astronaut Eugene Cernan on the Apollo 17 mission in 1972. His glove from the mission is still covered with dust from the moon’s surface. The glove was designed to protect from the hostile climate of the moon yet have sensory tactility in the finger tips. The human experience is fundamental to space exploration and will be best designed in partnership of the arts and science. Ultimately mankind, not machine, has longing desire to colonize outer space. 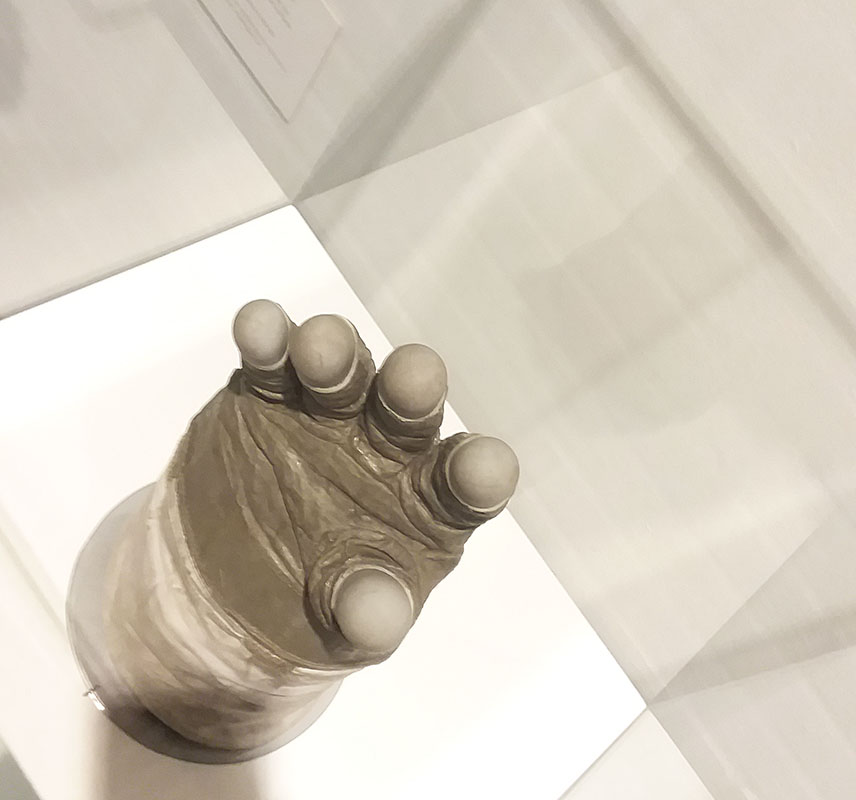 If you’d like to hear more about my research in Copenhagen, scenarios planning, sketching the city and design be sure to subscribe to my Newsletter in the below banner. Don’t miss a thing!

A little throwback on a recent amazing event. Circ

When it rains, it pours Hanging with my brother at

When it rains, it pours Hanging with my brother at